Recommended for: Small families
Maintenance Level: High
Lifespan: 10-14 years
Temperament:
Intelligent, loyal
Health Risk:
High probability of health issues during its lifetime, hence it is one of the more expensive breeds to insure. 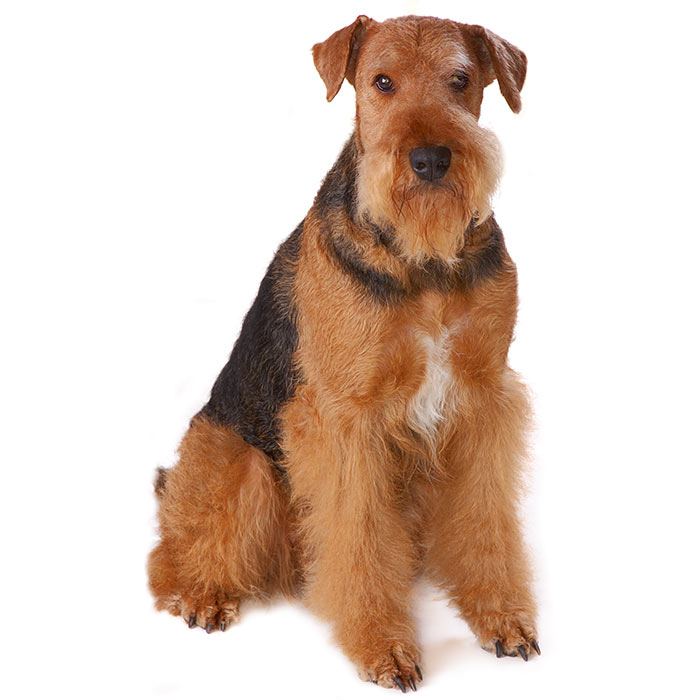 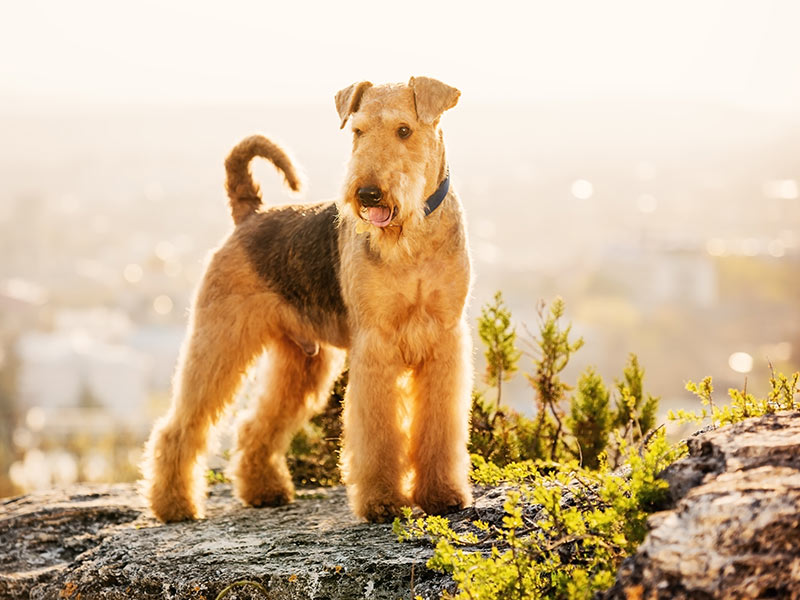 The Airedale Terrier is the largest of all terrier breeds. The breed is tall and sturdy with a muscular body and covered in a thick, course coat of fur.

Airedale Terriers are known for their heavy shedding and need a high level of grooming compared to many other breeds. Originating in England in the 1800s, the Airedale Terrier was developed by cross breeding a Terrier with an Otterhound, although it is suspected that there are other breeds in the mix. It is widely believed that the old Black and Tan Terrier, together with the Broken Coated Terrier were probably used.

The Airedale Terrier was developed, like most dogs of the time, strictly for the purposes of hunting. Their great strength, paired with their size and agility made them a suitable breed for the hunting of small and medium-sized game such as rats, rabbits and foxes.

While the terrier breeds have the reputation for being quite independent and stubborn animals, the Airedale Terrier is very trainable. The breed is very proud and confident but with a consistent reward-based training regime from an early age, the Airedale Terrier will develop into a very obedient companion dog.

Airedale Terriers are popular family dogs and have a great reputation for good-natured and gentle play with children. This being said, they are prone to getting easily excited, and can become too rough for smaller kids. They are very intelligent dogs and live to please their owners yet, if there is a distraction, like a bird, rabbit, cat or smaller dog, Airedale Terriers tend to chase rather obey commands.

A hunting dog with bounds of energy, the Airedale Terrier requires a good deal of exercise to remain happy and healthy. Good long walks at least once or twice a day are essential, and this will go a long way to curbing any behavioural problems that can develop.

Airedale Terriers will generally grow to between 58 and 61cm. The breed should weigh between 23 and 29kgs and will live to age of 10 to 14 years. Airedale Terriers were developed to excel as an independent hunting dog. Their intelligence, paired with their love of the chase and fierce determination makes the breed a very loyal yet head-strong type.

The Airedale Terrier is an extremely energetic, optimistic and persistent breed that thrives on work and demands a great deal of attention from its owner.

Because of their high level of intelligence and energy, the Airedale will become over-excited or rowdy if not given enough physical and mental stimulation. They will tend to develop destructive habits such as digging or chewing if not taken for enough walks, and a good game now and then is essential to its happiness.

The Airedale Terrier is an independent hunting breed and will aim to please its master. While the breed is very loyal, its independence can mean that Airedale’s can become distracted by other animals and even cars. They must be kept on the lead whilst being taken for walks as they are prone to being caught up in the chase.

While aggression towards other dogs can occur with the breed, the Airedale Terrier is very responsive to good, clear and consistent training techniques. Socialise the breed early and regularly to avoid aggression problems in the future and be train your Airedale with a reward-based system to get the best out of them.

The breed is great with kids, but the Airedale Terrier’s size can prove too much for some smaller children. Always supervise playtime with kids and your Airedale, especially if the children are under the age of eight. 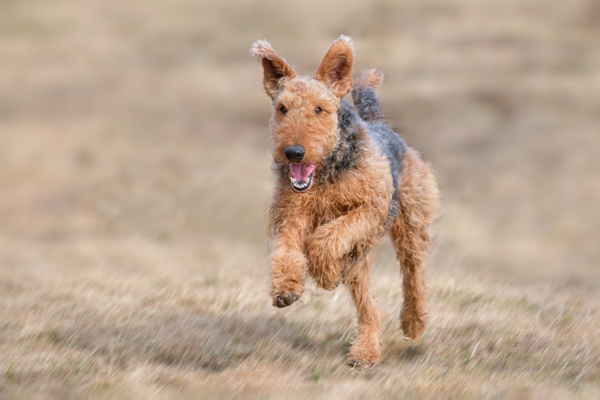 The Airedale Terrier’s development dates back to the mid-1800s. Although the breed’s exact origin and mix is the subject of debate, it is understood that the original Airedale was a mix of an Old English Black and Tan Terrier with an Otterhound.

Although it is known that the Otterhound and Black and Tan Terrier were the Airedale Terrier’s beginnings, it is widely believed that there were a number of other breeds of terrier and bull baiting dog introduced to the breed to develop its strength. The Airedale Terrier was formally recognised soon after its initial development, being officially accepted by the English Kennel Club in 1886.

The Airedale Terriers came arrived in Canada as soon as the 1880s and reached the United States in the early 20th Century.

The breed was put to good use during the First World War. Much like the German Boxer, the Airedale Terrier bravely carried messages between the lines and carried heavy packs of water, food and medical supplies through the trenches on the Western Front. The breed became very popular with soldiers and developed a reputation for a determined and brave character.

In the 1920s the Airedale Terrier reached its height of fame; then formally acknowledged as the most popular breed of dog in the United States. 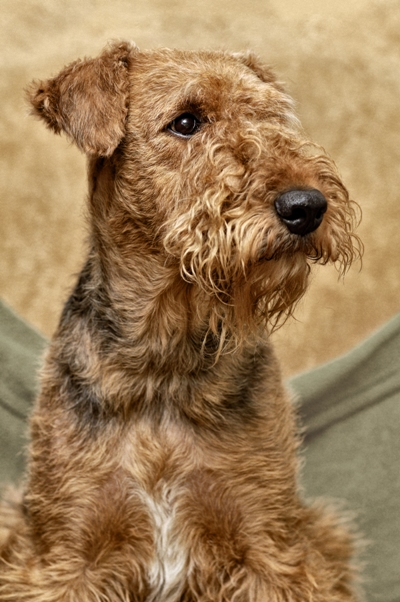 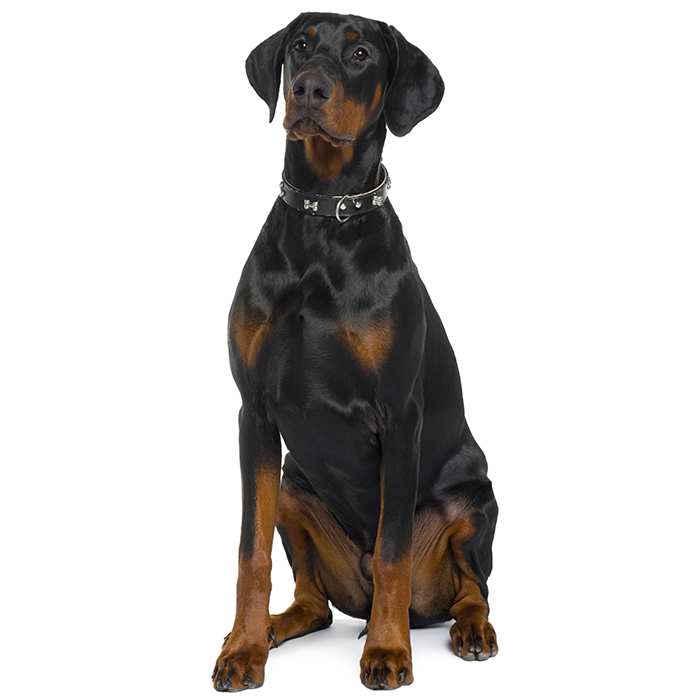