If your dog isn’t already diagnosed with epilepsy, there are a number of other reasons that can cause seizures. Brain cancer, especially the growth of large tumours that put pressure on the brain can result in serious and recurrent seizures. Anaemia can be a cause, as well as kidney disease, stroke, high or low blood sugar, head injury and poisoning.

A seizure is recognised by viewing the erratic physical behaviour of your dog. During the most common type of seizure, a generalised seizure, they will lose consciousness and convulse uncontrollably. The body twists and shakes because of an unusual electrical activity in the brain. The seizure can be violent and last for a number of minutes.

While there are a number of reasons for seizures in dogs, epilepsy is also a likely cause of the recurrent convulsion attack. If you suspect your dog may have epilepsy, your veterinarian can perform a number of tests to determine the true cause.

You won’t be able to miss it when your dog is having a generalised seizure. You will notice a jerking of the body, arching of the back, the twitching of muscles and violent chomping, tongue chewing or frothing at the mouth.

The focal seizure usually attacks one side of the body or one limb in particular. This is because during a focal seizure, unusual electrical activity happens in only a limited part of the brain whilst the rest of the brain functions normally. These seizures, too, may last for between a couple of seconds to a couple of minutes.

Psychomotor seizures are perhaps the most difficult types to diagnose. The symptoms are similar to bouts of ‘madness’, ‘clownishness’ or ‘silliness’. All of a sudden your dog may begin chasing its tail ravenously or it may growl at, pounce on and tear apart an animal made up of thin air. While they are harder to determine, the strange behaviour during psychomotor seizures are always consistent.

Some symptoms that are common to all the types of seizures include:

In most cases, seizures will be easily recognisable by the violent physical movements of the animal. Seizures will usually last between a few second and a few minutes.

It’s important to always remain calm while you dog is having a seizure. If they are near any sharp of hard objects that could cause injury, gently move them away. Calm your dog by gently placing your hand on their stomach or back; never put your hand near their mouth as they may bite down hard on you.

If your dog’s seizures are lasting for more than five minutes overheating is a serious concern. Take your dog to vet for assistance, even during a period of seizure, to be sure the animal is not at risk of serious injury.

There are a number of physical symptoms that the vet can test for, including:

While the physical condition of the animal will help the vet determine the type of epilepsy is the cause of the seizures, it will also help them to determine what medications will best suit their needs.

Other causes of seizure such as poisoning and stroke can also be diagnosed by your veterinarian; usually by carrying out thorough physical examinations, followed by a number of in-depth and conclusive tests.

It’s important to seek the assistance of a veterinarian the moment you begin to notice seizures. In most cases, epileptic seizures will progressively damage the brain, causing lesions to form if not treated properly.

There is no cure for epilepsy, however your vet will proscribe your dog an antiepileptic drug to help manage the seizures. The medication, paired with life-long therapy is aimed at reducing the frequency and severity of the seizures. Medication may have some unwanted side effects but, if the clusters of seizures are reduced and the damage that comes with each one lessened, then the treatment is considered a success.

Antiepileptic medications and their dosages may differ, depending on your dog’s age, health and other specific needs. If your dog is experiencing fewer seizures than another animal, the dosage and type may vastly differ also. Common side effects of the most popular medications include sedation and increased appetite.

The medications commonly used are diazepam, potassium bromide and phenobarbital. These medications are aimed at reducing the unusual electrical energy that occurs in the brain leading up to and at the time of a seizure.

There is no way to prevent epilepsy from developing in dogs or cats. Because a common cause of epilepsy is trauma to the brain, keeping your dog safe from head injury is perhaps the only way to prevent the onset of seizures.

There are, however, a number of things you can do to ensure your dog is safe during a seizure. When a seizure strikes, your dog will have no control over their physical actions; be sure that they aren’t in the vicinity of any edges or hard objects that may cause them injury or further harm.

The best thing you can do for a dog suffering a seizure is to stay calm. As the dog’s owner it’s important to remain a calming influence and in control. The animal will feel your emotional presence, especially during recovery, so talking softly to them, gently rubbing their tummy or back until they regain consciousness is a good idea.

Remember, never put your hands near the animal’s mouth. They won’t mean to, but biting is common in animals suffering a seizure. They aren’t in control of their body and their reflexes could cause them to bite down hard.

If seizures last for more than five minutes, overheating is a possibility. This can prove life-threatening and emergency veterinary care is advised.

Epilepsy will usually present itself while the animal is still young. It’s most likely that the first seizures will occur between the ages of 10 months and 3 years. Breeds that are more likely to develop the condition aren’t necessarily going to; it’s simply statistically more likely.

Epilepsy is the name given to a number of recurring seizure types. While epilepsy (erratic electric activity in the brain) is a common cause of seizures, it’s not the only cause. Brain cancers as well as poisoning are also common causes.

Although there is no hard data available, according to the Canine Epilepsy Network (CEN), as many as 4% of all dogs may be affected by epilepsy. The condition is common, but luckily the seizures are now very treatable.

A seizure can come on very quickly. Your dog may be happy-go-lucky one minute, then uncontrollable the next. While seizures only last a number of seconds or a few minutes, the effects of a seizure can last 24 hours or more. 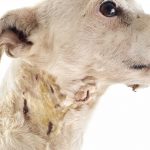 Sarcoma in dogs Soft tissue sarcoma is a group of benign or malignant tumors that form in an animal’s soft and/or connective tissues. Read more