Recommended for: Active families and game hunters
Maintenance Level: Medium
Lifespan: 12-13 years
Temperament:
Sweet, sensitive, fun-loving, independent
Health Risk:
This breed has a medium probability of having health issues in its lifetime, hence it is one of the more affordable breeds to insure. 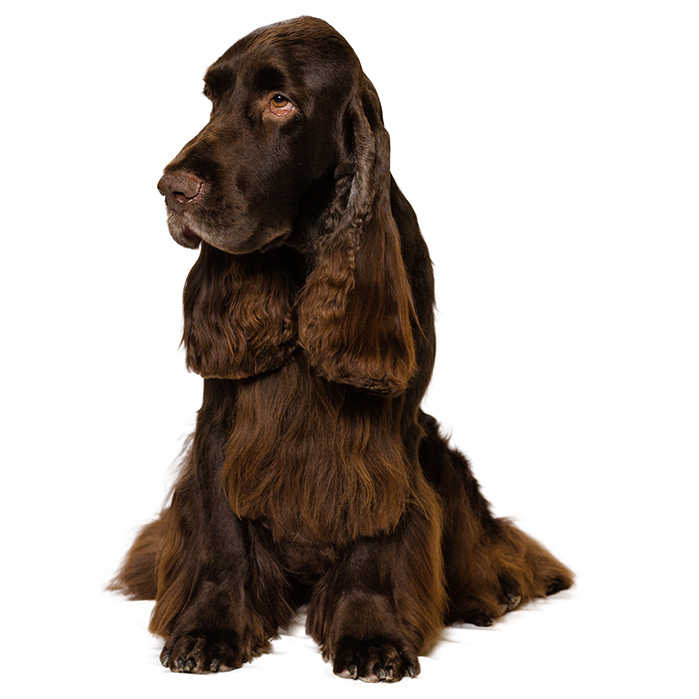 The Field Spaniel is a medium-sized sporting dog breed of Spaniel type. She is a hunting companion bred for activity and endurance in a heavy cover and water who will work enthusiastically in the field – hence her name. Solidly built, with moderate bone and firm, smooth muscles, she is sturdy and athletic. She reaches a height of approximately 46 cm at the shoulders and a weight of 18 to 25 kg.

Affectionately called the ‘Field’, she bears a familial resemblance to Cocker, Springer, and Sussex Spaniels. She has a well-balanced, upright carriage, a docile and unassuming attitude and a serious, gentle and intelligent expression. Her attractive, glossy coat is moderately long and comprises a single layer. It comes in solid colours of black and liver, or in combinations of the two. Feathering of the fur appears on the chest, belly, ears and on the back of the legs. Her long, feathery ears frame her expressive face.

She is active and inquisitive and makes a good companion who enjoys brisk activity as well as downtime at home with her family. It is essential that she gets regular exercise and mental stimulation; if left alone and unoccupied for long periods of time, she may become bored, hyperactive and destructive. The show ring, canine sports such as agility, and of course, hunting, are all arenas where she can find the physical and mental challenges she needs.

Fields are found in a wide variety of lifestyles, from city to country, but are particularly well suited to country dwelling. However, they are not everyone’s cup of tea, having some unattractive traits such as snoring, sloppy drinking and perpetually shedding coats. The Field Spaniel loves people and is a loyal, affectionate companion who is devoted to her family and likes to stay close to them. The breed is known for its calm, sweet and sensitive nature and is not as excitable as its close relative, the Cocker Spaniel – in fact, the U.S. breed standard describes the Field as “unusually docile”.

In attitude, the Field can range from serious to fun-loving to clownish. She is inclined to be reserved with strangers but will gradually warm up to them. She is patient and trustworthy with children. Despite their docility, Fields are unusually active and very independent. They are also known for their level-headedness and perseverance. With their deeply rooted hunting drive and tracking ability, they are energetic and enthusiastic whether at play or working in the field. They are playful and enjoy a good backyard romp.

Fields are receptive to training and can be motivated by their desire for food. They are intelligent problem-solvers who can excel at most tasks when properly motivated. They are “thinking dogs” who need to understand what is expected of them and thrive on clear communication and reward, with minimal correction. They require early socialisation and a trainer who is sensitive to their needs. When socialised, they are good with other dogs and tolerant of other animals. The earliest Spaniels originated in Spain, which explains their name, but most of the modern breeds were developed in Britain. Well into the 1800s, the several British Spaniels used by hunters for flushing gamebirds from cover were not classified by breed, as they are today. Rather, they were organized by size and job description – the larger Spaniels were called Springers, and the smaller ones Cockers, named after the woodcocks they excelled in flushing.

With the onset of dog shows in England in the 1870’s, categorising specific types and breeds became important, and the name Field Spaniel was used to describe the Spaniel type born of Cocker, English Springer and Sussex crosses. Already skilful hunters, these early Fields found immediate success in the show ring.

Field Spaniels were one of the first breeds to be shown and registered in America. Their show careers trace back to the early 1880’s with records showing that a black Field Spaniel was an American Champion by 1883, a year before the American Kennel Club was founded.

Unfortunately, the Field’s accomplishments in the arena encouraged breeders to produce a showy Field Spaniel, with an extremely long, low shape that was described as a “grotesque caricature of a spaniel”. These short-sighted breeding practices destroyed the Field’s value as a gundog and introduced health problems to the breed. The Field’s decline was as rapid as its ascent, the breed soon teetered on the brink of extinction.

During the mid-20th century the Field was resurrected by dedicated breeders who re-introduced  Cocker and Springer blood, rebuilding the dog along its original lines as a longer-legged dog that was once again suitable to be used for field work, retrieving game from land or water. In the decades since, the Field Spaniel’s rise and fall and rise-again has served as a cautionary tale for dog breeders.

Nowadays, the breed has evolved into one that is fit for both the show ring and the home, with no difference between working dogs and show bred dogs, and it is the mission of Field Spaniel Societies around the world for the breed to remain as such. While she retains her excellent hunting skills, the Field is mainly a family companion and show dog and is rarely seen in the field.