Recommended for: Those wanting a working dog, canine sports competitor or companion for demanding outdoor adventures
Maintenance Level: High
Lifespan: 10-14 years
Temperament:
Loyal, independent, protective
Health Risk:
This breed has a medium probability of having health issues in its lifetime, hence it is one of the more affordable breeds to insure. 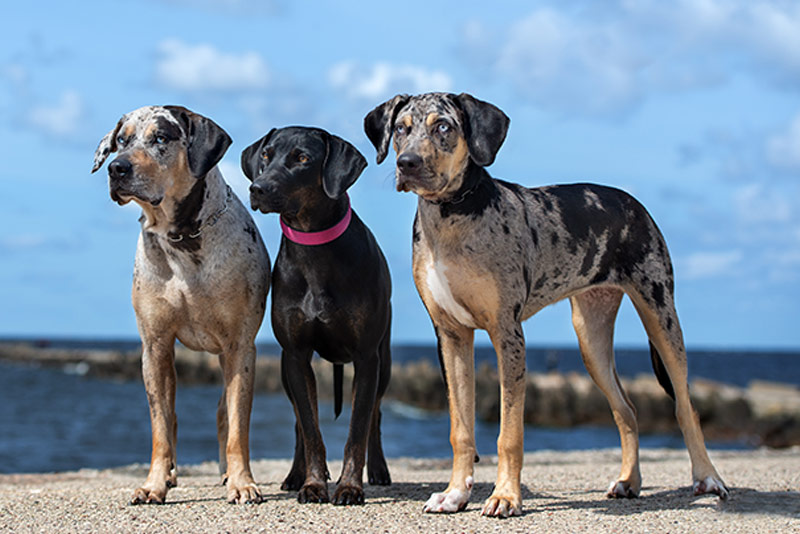 The Louisiana Catahoula Leopard Dog, shortened to “Catahoula” or just “Cat” by enthusiasts, is a unique working breed with a striking appearance. Originating in Louisiana in the south of the United States, the multi-purpose Catahoula is trim yet also tough, well-muscled and powerful, possessing both agility and great endurance. He is a medium to medium-large dog who reaches a height of 51 to 71 cm and a weight of 25 to 40 kg.

One of the Catahoula’s notable features is his short to medium length coat with its many varied colours and patterns that give him a spotty and blotchy appearance. Apart from the popular leopard pattern, with a base colour and contrasting spots of one or more other colours, his coat may be solid, brindle, merle, or patched in many colours. Solid coat colours include black, blue, chocolate, red and yellow. Tan markings and a white or coloured trim may be found on the chest, cheeks, legs, underbody, above the eyes or under the tail. Another notable feature are his eyes, which may be blue, green, brown or amber, or he may have eyes that are each a different colour or have two different colours within the same eye.

Bred to be an intense and uncompromising worker, he may adapt poorly to life as a companion animal unless he is provided with large expanses of land and/or a very large amount of exercise. Because of these needs, he is not suited for city living or a small house or apartment. The ideal home for him is one with a very large fenced yard and opportunities to perform his natural work of tracking and herding.

Options for exercise include walks several times a day, long hikes and play time in the backyard, retrieving balls or flying discs. Swimming is another good exercise – he has webbed feet, which enable him to swim well and to work in soft, marshy areas. Training for dog sports like agility, obedience and rally are also good outlets for him.

Despite being a working dog who needs to spend plenty of time outdoors, the Catahoula should not be left to live outside on his own. Without the proper amount of physical and mental stimulation, he will be bored and lonely, and become destructive in his attempts to entertain himself – for example, digging holes and chewing things to shreds. Unfortunately, because of the many behavioural problems that can occur, this breed is over-represented in animal shelters and rescue centres across southern America. By nature, the Catahoula Leopard Dog is territorial, protective and fearless – he will not hesitate to attack a wild boar. He may also be a devoted and loyal family companion, once he knows his place in the family unit. This tough, hard-working and independent dog requires a leader who is fair, firm and consistent, and has enough time to keep him occupied. He is definitely not suited to novice or timid dog owners. He will not tolerate mistreatment and will assert himself in self-defence, and he may in some cases exhibit aggressive behaviour.

Befitting his nature as a herding and driving dog, the Catahoula is wary of strangers. He is protective of his family and opinionated about who is and isn’t trustworthy – and is believed to be an excellent judge of character. He may be an excellent watchdog who will bark a warning or otherwise go on alert at the approach of strangers, successfully deterring them in most cases; however, different animals can vary widely in their guard dog ability.

With his strong sense of family loyalty and protectiveness, the Catahoula is considered a suitable companion for families with children when he is socialised with them from a young age. However, he should always be supervised in the presence of toddlers or young children – he can be high-spirited and may accidentally knock small children down, or he may mistake children at eye level as attempting to challenge him. He can sometimes adapt poorly to life as a companion animal, and when it comes to showing affection, he can show great variation, from very aloof to fawningly affectionate.

Catahoulas are highly intelligent and capable of learning many and varied skills. They are, however, often very challenging to train and need firm, patient, consistent training from a confident trainer. They need early and frequent socialisation, particularly in order to be friendly toward other animals. Bred to work in packs, Catahoulas can do well with other dogs If properly socialised and raised with them. But because of their strong herding and tracking instincts, some Catahoulas never do well with other animals, including cats and other small mammals, and need to live in single animal homes. They may be aggressive toward unknown dogs, particularly males towards other male dogs, so Catahoulas should never be walked off leash. Leash training is particularly important because they are strong pullers.

Issues such as hip dysplasia, deafness, and eye problems can occasionally occur in the Catahoula Leopard Dog. The Catahoula originated in the North America state Louisiana in the region around the Catahoula Lake, from which it got its name (the word Catahoula is of Choctaw origin and is translated to mean “sacred lake”). Catahoulas are the only breed of dog to have historically originated in Louisiana. The breed was developed long before written records of breeding practices were kept, by farmers who cared only for working ability, not pedigree. However, it is believed to have originated sometime between the 1520’s and mid 1800’s by cross breeding the dogs of the local Native Americans with those brought to the area by European explorers and settlers.

The Native American dogs of the time were described by the Europeans as being nearly identical to the wolf, except smaller, with a bark like a dog. The early Spanish explorers brought a number of “Spanish War Dogs” with them –brutal killing machines of three types: Alaunts, Mastiffs and Sighthounds. Some of these dogs were abandoned after battles in the region, while others were acquired by the Native tribes through trade. Thereafter, French settlers arrived in the region with their hounds, breeds such as the Bas Rouge (Red Stockings) and the Beauceron, and further crossbreeding eventuated.

The early European settlers used these crossbred dogs to pen and catch the wild hogs and cows that were extensive in the area, and they became legendary for this skill, working naturally in a pack to do so. This practice developed into a unique method of managing stock in which the dogs create a “canine fence” around the herd, within which the herd is directed by the dogs’ master. Life in the region was often extremely difficult and it was costly to keep a pack of large Catahoulas. Subsequently, only those dogs which were most capable workers, skilled trackers and most pack-oriented could be kept, and were able to spread their genes to subsequent generations. By the end of the 20th Century, the breed was known as the, “King of all Stock Dogs” and was one of the most popular of all breeds in the Southern United States.

In 1979, the Catahoula was named the State Dog of Louisiana and its name was officially changed to Louisiana Catahoula Leopard Dog. As late as 1995, the United Kennel Club was the first national dog registry to recognize the Catahoula. It has not yet met the requirements for full recognition by the American Kennel Club and may not participate in AKC conformation events. Today, unlike most modern breeds, a sizable majority of Catahoulas remain primarily working dogs. This breed is one of the most highly regarded stock dogs in the United States and is also very commonly used for hunting any species from squirrel to mountain lion. 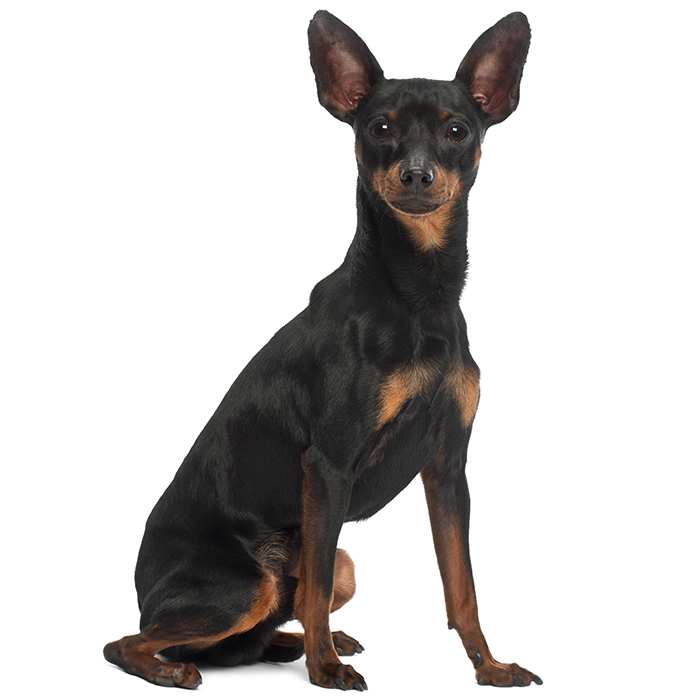