Recommended for: Active couples, people who enjoy dog sports like agility, herding or tricks
Maintenance Level: Medium to High
Lifespan: 10-15 years
Temperament:
Active, intelligent, self-confident, aloof, loyal
Health Risk:
This breed has a medium probability of having health issues in its lifetime, hence it is one of the more affordable breeds to insure. 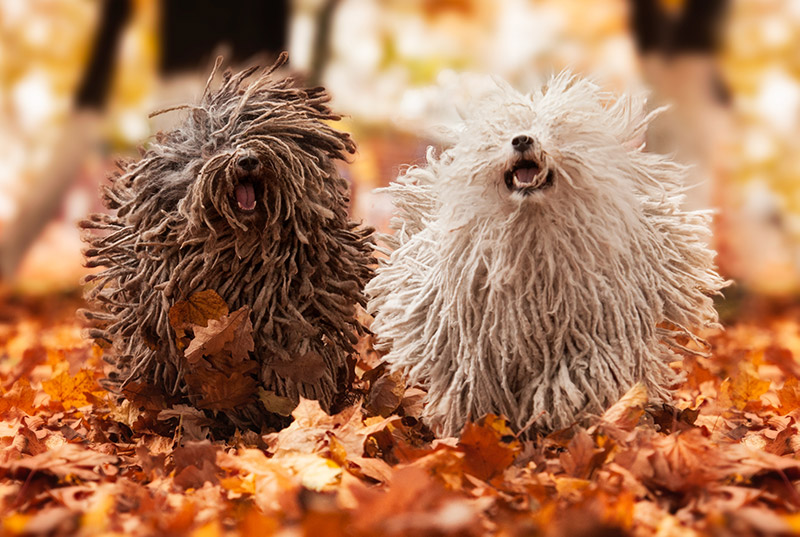 The Puli (pronounced “Poo-lee”, plural “Pulik) is a breed of Hungarian herding and livestock guarding dog with a uniquely distinctive coat. Characterised by long, woolly, corded dreadlocks covering his compact but powerful body from head to tail, no other breed can be mistaken for the Puli. Looking somewhat like a mop, he seems much larger than he is because the width of his coat across his back is up to three times wider than his actual body. With all that hair, the small-boned Puli can weigh up to 16kg and reach a height of about 46 cm, with the female being slightly lighter and shorter than the male.

Bred to work closely with humans, he is a hardworking, energetic and faithful little pocket-rocket. He is brimming with self-confidence and intelligence and is a quick learner. Also known as the Hungarian Puli and the Hungarian Water Dog, the breed is still used for herding sheep in its homeland. Hungarian shepherds take great pride in the Puli and his abilities that is expressed in a local saying: “He’s not a dog, he’s a Puli.”

The distinctive Puli coat comes in solid colours of rusty black, black, all shades of grey, and white, of which black is the most popular. In Hungary, another common colour is fako, described as the colour of the inside of a whole-wheat roll. The breed is suited to all climates with its thick coat withstanding extreme weather. However, care should be taken in hot weather to not leave him outside or overwork him.

The non-shedding and hypoallergenic coat can take about four years to mature and cord completely, by which time it will probably reach the ground. It is comprised of a coarse, wavy or curly outer coat and a soft, dense, woolly undercoat. The outer- and under-coats clump together and develop into the corded coat. Cord types vary considerably in shape and thickness, from round cords to ﬂatter ribbon cords, depending on the texture of the coat and the balance of undercoat to outer coat.

While some coats are self-cording, most need a helping human hand along the way to get them started. Cords on the head fall over the face, obscuring the dog’s vision, so some owners tie up these cords to keep them off the eyes. This is definitely not the coat for beginner dog owners, and often even professional groomers don’t know how to properly manage it.

Being a lively and energetic herding dog with a small but muscular body, he does best in a home with enough space to race off his natural energy. A large, fenced yard (make that a very tall fence – it’s been reported that Pulik have jumped six-foot fences!) or a farm is ideal. He is adaptable and can adjust to smaller living spaces but may take to running laps around the dining room chairs and taking leaps over the couch.

Being a working breed, the Puli is both an active and super-intelligent dog. If he’s not being put to work, he needs plenty of mental stimulation and physical challenges, otherwise he can become bored, which can lead to destructive behaviours such as barking, digging, and chewing.

This agile and self-confident dog can find physical and mental stimulation in canine sports, such as herding, agility, and obedience competitions – however, he does quickly become bored with repetitive obedience tasks. His favourite activities include outdoor pursuits like long walks, trips to the dog park, stimulating games and spending quality time with his human companions. He needs a daily walk or jog and enjoys romping and playing, especially if his owner or a companion dog joins in the fun.

Bow Wow Meow Pet Insurance is rated 4.2 stars on consumer ratings site, productreview.com.au based on 2,039 independent customer reviews (as at 17/09/2020). 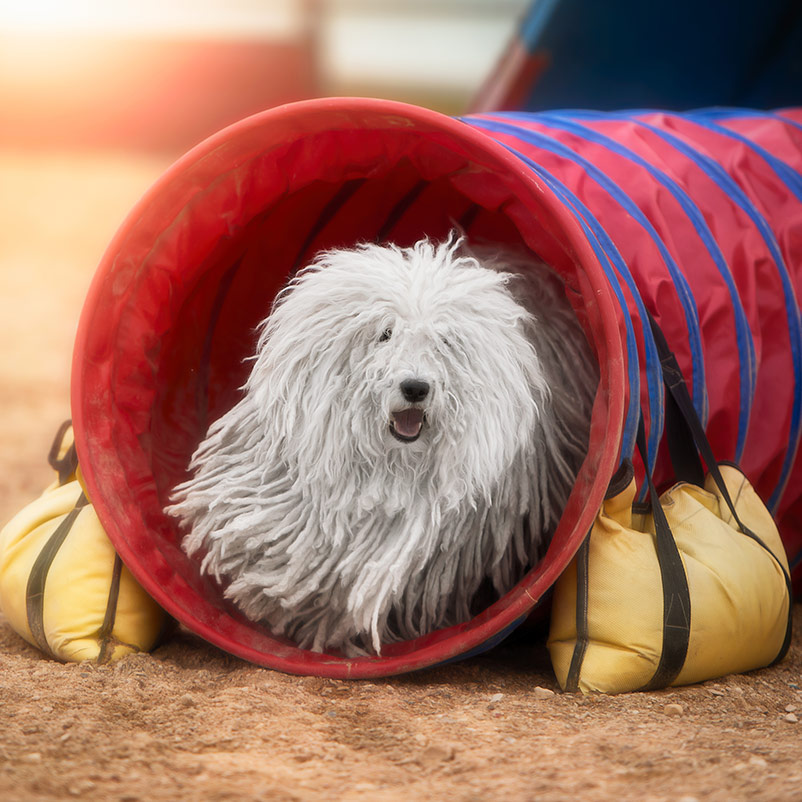 Bred to be a herding and guarding dog and the companion of a lone shepherd working in the remote Hungarian hills, the Puli can be reserved and mistrustful towards people outside his immediate family. Though wary of strangers, he isn’t usually aggressive, but may well give a vocal warning if he feels that his family is being threatened. This suspicion of strangers, combined with his self-confidence, makes him an excellent watchdog.

As a breed with strong protecting and herding instincts, the Puli will attempt to boss his family around and often tries to herd people by nipping at their heels. He has a dominant nature and likes to be top dog. A firm but kind owner, as well as proper training and socialisation, are essential for the strong-willed Puli. He must learn good canine manners and behaviour, and his owners must learn not to be bossed around by him. If he senses that his owners are not as strong minded as he is, he will believe that he can make up his own rules for the home.

The Puli is highly intelligent and eager to please his owners, which means he can learn new tasks rapidly, but can also quickly become bored. He will follow commands, but because of his headstrong nature, he like to do things his own way – so housetraining can be challenging. This is a vocal breed that tends to bark, so a “quiet” command should be part of early training.

He also needs to learn at a young age to be accepting of other dogs and pets in order to get along with them. He has a great sense of humour, loves to play and likes to have a lot of toys. However, because of his guarding instincts and reserved and headstrong nature, he may not be a good companion for families with young children. He is more suited to active couples and those who want to partake in canine sports such as agility, herding or tricks.

Pulik are generally healthy, but like all breeds, they are susceptible to major health issues such as canine hip dysplasia and certain eye abnormalities. 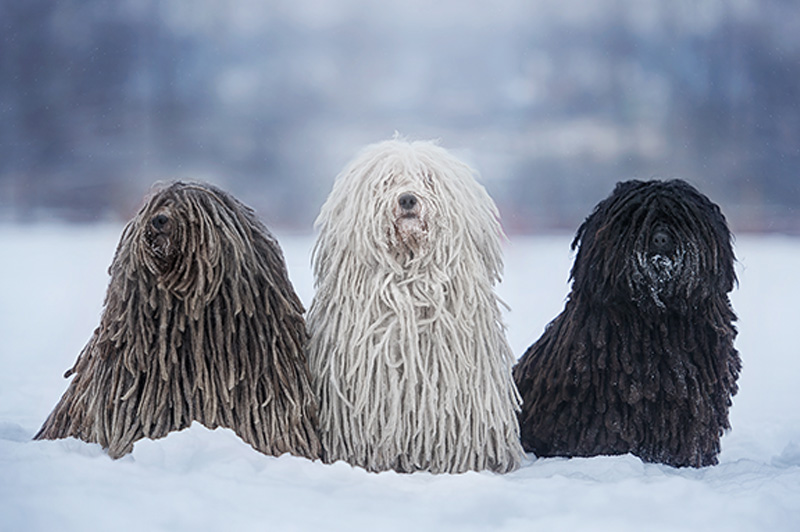 The history of the Puli is a long and interesting one. This is an ancient Hungarian sheep-herding breed with origins dating back thousands of years. In fact, there are credible signs that a dog similar to the Puli existed 6,000 years ago, in the place that is modern-day Iraq. Around the turn of the century, crews excavating for oil came across the grave of a man, believed to be a shepherd, who was buried with a sheep and a small dog. Among the remains they discovered a long, coarse knot of hair that resembled the fur of the modern Puli.

This same location was once the home of an ancient civilization known as Sumeria. Excavations at a town called Eridu unearthed clay plaques describing Sumerian laws about animals that referred to herding dogs and, in the crypt of an eight-year-old girl, a statuette of a Puli. These artefacts are indicators that this breed was used for sheep-herding thousands of years ago.

Another school of thought is that the breed is descended from a relatively more modern dog, the Tibetan Terrier. Around a thousand years ago, the nomadic Magyar tribes of the eastern Urals in Central Asia arrived in Hungary, mixing with the Turkish people on the way. They brought with them various sheepdogs, which may have included the ancestor of the modern Puli.

In Hungary, they became prized for their excellent herding abilities with large flocks of sheep and their corded coats protecting them from the region’s brutal winters. Many of the shepherds preferred black-coated dogs because they were easier to detect among their white flocks during the day. However, the lighter coloured Puli was also useful, blending in with their charges while guarding the herds and flocks from thieves and wild animals at night.

By the 1800s, the Hungarian shepherds had determined the very best characteristics of their Puli sheepdogs, and they tried to breed specifically to produce high-quality animals, culling those that were not up to scratch. The first description of the Puli was written in the late 1800’s, but by then the need for the sheepdog was diminishing, and its numbers declined significantly.

Fortunately, in 1912 the Puli was saved from extinction by Dr. Emil Raitsits, a professor at the Hungarian University of Veterinary Medicine. He was aided in his efforts to save the breed by the director of the Budapest Zoo, Adolf Lendl. Together they remodelled an exhibit of the zoo and dedicated it to the breeding of the Puli breed. The foundation stock for many Hungarian kennels came from their efforts.

In the 1920’s, the breed’s popularity was on the rise again, increasingly as a companion animal, and owning a Puli, a Komondor, or other native Hungarian breed became a source of pride in Hungary. The first breed standard for the Puli was approved by the Federation Cynologique Internationale (International Kennel Club). At that time the breed came in in range of sizes, but the most popular size was the medium-sized dog as it represented the conventional herding Puli.

In 1935, four pure bred Pulik were imported to the United States to be used in a herd guarding dog experiment undertaken by the U.S. Department of Agriculture, and the American Kennel Club registered the Puli the following year. At the outbreak of World War II, the experiment ceased, and the dogs were sold to professional breeders.

World War II almost destroyed the breed in Hungary. Breeding kennels gave their valuable stock to people in other countries, and many Pulik who were left behind were killed in the conflict. But, once again, this hardy and defiant breed survived, and after the war, the number of Pulik in Hungary grew. In 1959, the Hungarian Puli Club created a Puli breed standard that eliminated the toy and police-sizes and included all the remaining sizes in one category. By the 1960s, the number of Pulik in Hungary had reached pre-war numbers.

Today the Puli is well established in many countries besides Hungary, where it is now regarded as a national treasure. The modern Puli is modestly popular as a show dog or companion animal and continues to be a highly skilful herder. 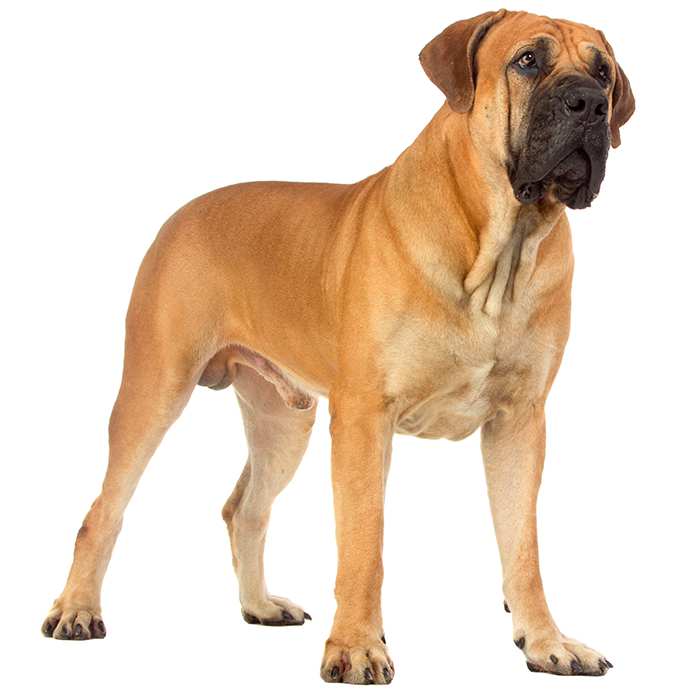